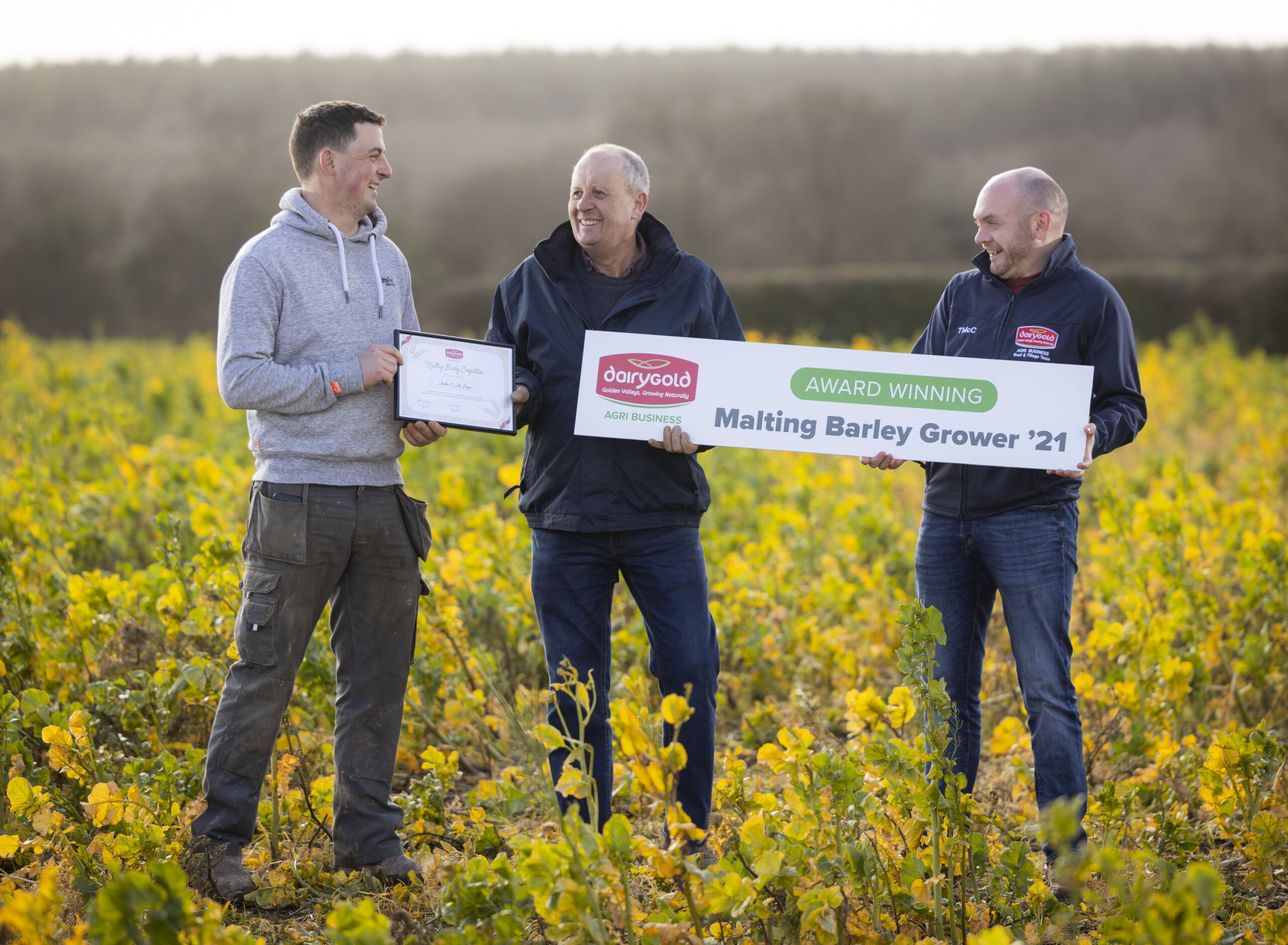 Farming around the greater Carrigaline / Crosshaven area is father and son team, Gordon and John Bryan who are the regional finalists from the South Cork area in the Dairygold Malting Barley competition. The family unit also makes up Gordon’s wife Doris and daughter Rachel, who is working off-farm. Tillage is their principal enterprise, growing a mixture of cereal and root crops for malting, seed and inter-farm trading. They work 250 acres of light to medium soils, planting a mixture of crops in a well-planned rotation with the overall aim of increasing yields and quality. Also, they rear some beef cattle over the winter where they are fed a mixture of beet, silage and grain that is produced on the farm, only purchasing some protein to complete the diet.

Crops include malting barley, seed wheat and barley and some winter feed barley all grown in a rotation following beet.
Winter Barley is traded to local dairy farmers who take the grain at harvest and preserve it for winter feed. Further to this, sugar and fodder beet is grown on a 3 to 4-year rotation on the farm and they are readily achieving yields of 25 to 35 ton / acre respectively. This is only possible with the support of good loyal and understanding customers who the Bryans are fortunate to have and appreciate. Last year Smart beet was grown on some land where wild beet was a known problem. Although their ground is well suited to beet, Gordon mentioned because of their proximity to the coast, they sometimes encounter problems with virus yellows in beet crops.
On the lighter soils, spring barley and spring wheat is favoured for early sowing and they can achieve yields of 3.5 to 3.7 tonnes per acre consistently.

Gordon and John maintain a close eye on soil fertility, and each field is tested every 3 to 4 years. As a result, their soil indices are very close to optimum levels and they are able to reduce fertiliser costs on some land by using compounds with a lower phosphorus content such as 15-3-20. Slurry from the cattle enterprise is spread on beet ground just before ploughing and on grassland. This allows them to reduce P + K requirements from chemical fertiliser.

Establishment
Gordon and John favour a plough based system on their farm, and sowing is done with a one pass drill and a run of the roller before and after sowing to provide a fine seedbed and to get crops off to a good start. They have already ploughed 30 acres this spring, which will reduce the workload when spring sowing gets underway.

Cover crops and the environment
Last year was their 2nd year growing cover crops on the farm. A Phacelia and Vetch mix was planted after winter barley while stubble turnips and fodder rape were planted on some spring barley ground. John feels that land is easier to cultivate after the cover crops. The soil breaks up easier and fields are drier over the winter with little to no run-off. Gordon has noticed a lot more birds and wildlife in the fields over the winter since they started growing cover crops.
Hedgerows are maintained every 2 years on the farm and watercourses are protected with natural woodland which is ideal. Nature is high on the Bryans’ agenda and this can be seen in the way they carry out their farming activities.

Machinery
Most of the work is completed by themselves except for the combining of the cereals. They keep machinery well maintained and up to date, availing of the TAMS grants to upgrade to the latest technology and now have GPS with automatic section control on both the sprayer and the fertiliser spreader. John commented that crops appear to be more even as the technology is very accurate applying the exact amount of product in the right place and already they can see cost savings across the farm. There is no lodging on overlaps and headlands are more uniform. They are considering a move to full autosteer on the tractors which they believe will pay for itself by reducing fuel and input costs.

Grain Quality
Over the past few harvests the quality of grain produced on their farm has improved. This is attributed to soil fertility, a good rotation and the use of modern application technology. The contractor that cuts their cereal crops is a reliable operator and keeps an eye on combine settings to ensure a good grain sample is provided at the weighbridge. Gordon feels this is crucial and said he has seen a sample of barley at 63KPH and 11% screening brought to 68KPH and 6% screenings by making a simple adjustment to the combine.

Looking to the future
Gordon and John will look to make further use of modern technology to increase efficiency on farm.

They are considering planting an area of beans in the future, replacing some of the beet acreage as price and demand changes with the end users.