Importance of Minerals during the Breeding Season

Welcome to the fifth addition of our Nutrition Series, a six-part video and article series brought to you by Dairygold and Alltech Ireland during April and May 2020.

Importance of minerals during the breeding season

The integral role that minerals play in a successful breeding cycle of the mid-lactation cow cannot be overlooked. Going into breeding, we want a cow that has a healthy immune system and displays a strong heat.

Trace minerals, such as copper, zinc and selenium, along with vitamin E play an important role in supporting this animal immunity. Even though animals are out at grass they may still require these trace minerals, as they are often lacking on many farms. Deficiencies in certain trace minerals can be related to infertility. For example, silent heats in the herd are linked to deficiencies in copper and manganese.

The quality of these trace mineral supplements is just as important as quantity. Using organic forms of these trace minerals such as BIOPLEX® or SEL-PLEX® will allow better absorption by the cow, meaning the animal will get more benefit and less will be wasted to the environment. These minerals will also be less likely to be ‘blocked’ by other minerals or antagonists such as molybdenum, iron and aluminium which are very prevalent in farms across Ireland which lock up these essential trace minerals. The levels of all of these trace minerals, along with how they all interact, can vary greatly within areas and soil types, and therefore can have different effects on grazing animals. Optimum levels of organic selenium have been shown to reduce incidences of metritis and reduced services per conception significantly (Agovino, 2011). It is therefore important to have a proportion of the mineral supplied in an organic form.

Bioplex minerals have a higher rate of absorption compared to other trace minerals. This is because the Bioplex mineral is “protected” as it passes through the digestive system. In simple language, Bioplex is more stable and allows trace minerals to make it to the site of absorption unbroken, allowing it to be absorbed. Inorganic forms of minerals, such as copper sulphate, simply fall apart before reaching the site of absorption because of the changes in pH or acidity along the digestive tract. This “free” mineral then reacts with many of the other compounds in the gut, resulting in a low level of the mineral being absorbed (i.e., low bioavailability).

Selenium, zinc, copper and manganese all play an important role in supporting the immune system and building the cows reproductive function. Research has proven that feeding these trace minerals in their organic form such as Alltech’s BIOPLEX® Copper and Zinc and SEL-PLEX®, an organic form of Selenium, leads to these minerals being better absorbed, stored and utilised by the animal. Because of the higher bioavailability of Bioplex minerals, more mineral is being absorbed meaning more are available in the future under times of stress within the animal.

A trial carried out in University College Dublin show that cows fed BIOPLEX® Copper and Zinc and SEL-PLEX® achieved higher conception rates and fewer days between calving and when they begin to cycle again. (fig1)

Fig 1: the effect of Sel-Plex ® and Bioplex ® Zinc and Copper on the reproductive performance of dairy cows 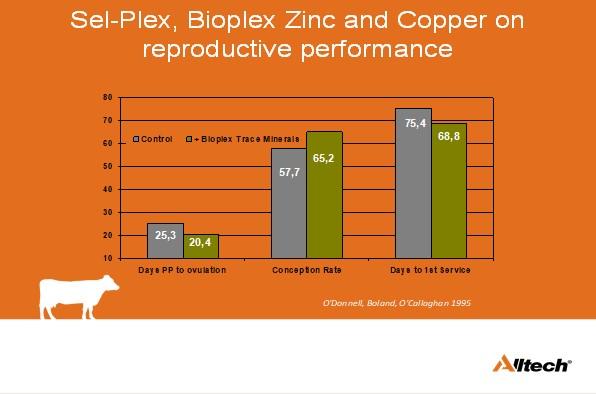 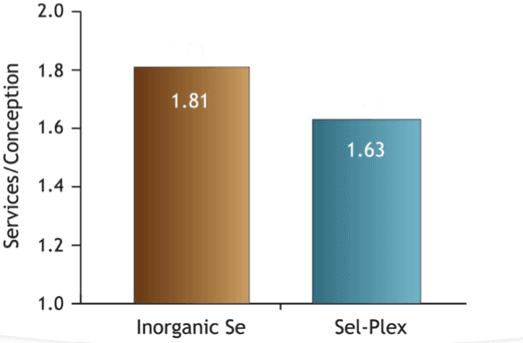 An added value of feeding Bioplex and Selplex minerals is that more of it is utilised meaning smaller quantities of these much more active trace mineral sources can be fed, reducing levels excreted in the faeces.

Further research has shown that feeding BIOPLEX® and SEL-PLEX® increased conception rates by 7.5%, reduced the age at calving for first lactation heifers by 26 days, who’s dams were fed these organic trace minerals compared to dams fed a control and increased milk yield by 1.7kg per day in the first lactation. (Pino, 2018)

When trace minerals are made available in the correct quantities and – more importantly – the correct form, the cow will be well placed to maintain a high health status while meeting all her production and fertility targets in full.

To give your cows the best chance this breeding season with mineral nutrition talk to your local ASM about including Bioplex® and Sel-plex® into your dairy feed.