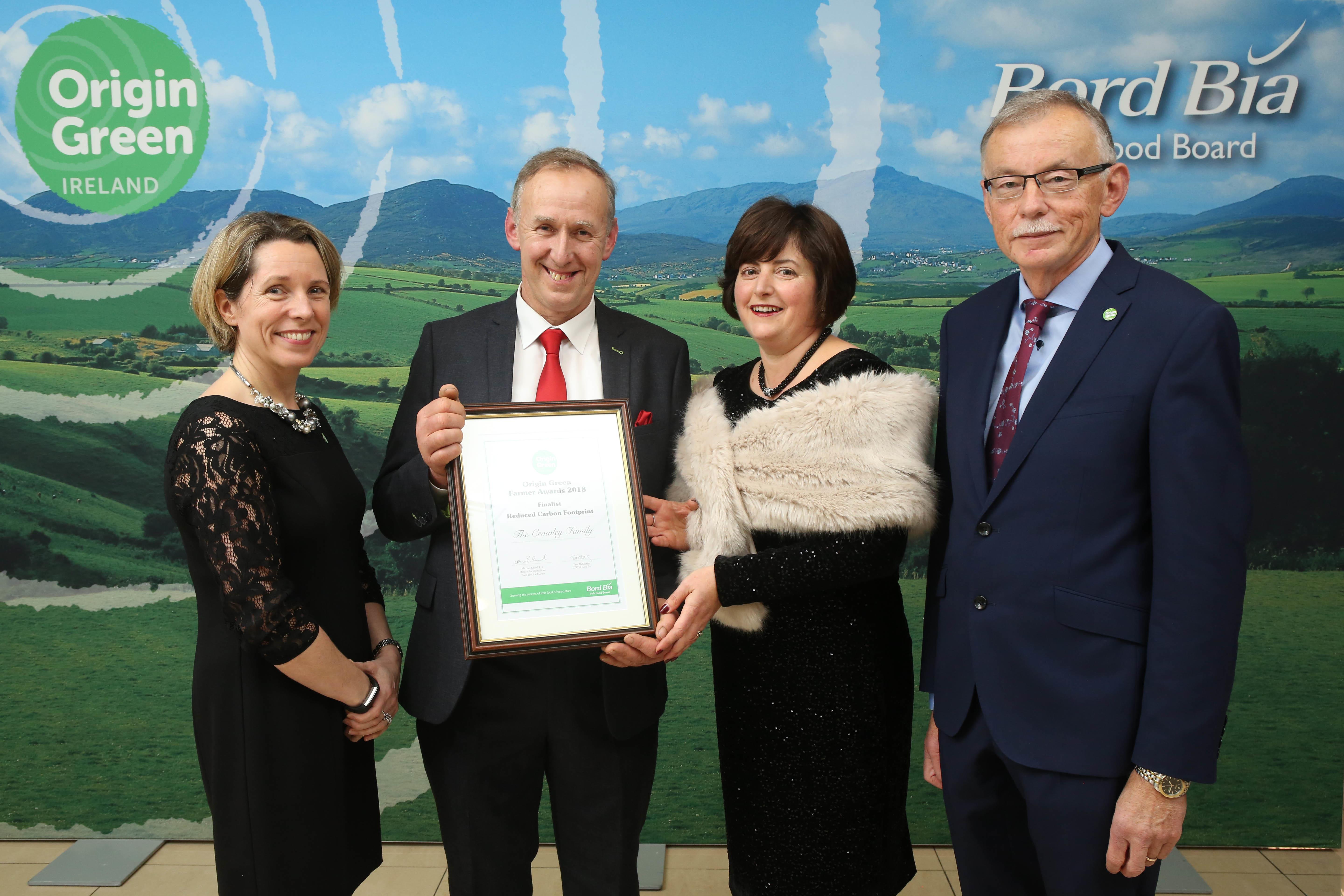 Leading the way for Sustainable Farming

Trevor and Olive Crowley farm with the help of their son Gavin and daughters Alice and Katlyn in Lissarda Co. Cork. They milk 138 cows at their 72 Ha farm. Their carbon footprint reduced from 1.33 to 0.79 Kg CO2 e FPCM/Kg MS over the last 3 years, making them the deserved winners of this years’ Bord Bia Sustainability Awards in the ‘Reduced Carbon Footprint’ section.

How did they achieve this fantastic improvement? Trevor took a multi-pronged approach. In 2015 Trevor invested in a trailing shoe system to spread his slurry. He also installed an aeration system into his largest slurry tank. All lands were soil sampled regularly and grass growth was actively measured. A targeted approach to slurry application was taken and slurry was only applied to the fields that needed it. Slurry was applied in mild or dry conditions, during the spring and summer. Trevor said that because of this approach grass growth and grass grazed by the cows increased and chemical nitrogen was decreased. Trevor calculated that he reduced his chemical Nitrogen usage by between 30 and 40 kgs N/Ha over the last three years.

Chemical fertilizer is also applied using a well calibrated, GPS-equipped fertilizer spreader, which ensured accurate and even fertilizer applications. Trevor doesn’t believe in wasting fertilizer in ditches! Increased grass growth allowed Trevor to extend his days at grass and cut back overall feed requirement. Having been a participant in REPs schemes, Trevor had added clover to some plots. Eight to ten years after this clover had first been incorporated it is still persistent and prevalent in these swards. Trevor admitted that initially it took some management to maintain and effectively utilize these clover-laden swards but now they are managed effortlessly. This clover increases cow milk solids and allows for chemical nitrogen reduction on these plots. All these factors have helped to achieve a 40% reduction in greenhouse gas emissions from the farm.

In the parlour energy savings resulted when Trevor put in a heat recovery system. This system traps the heat generated in the milk tank compressor and uses it to heat the water for the plant washing. The system proved to be so effective that Trevor found that it was more efficient to remove the plate cooler in the plant than to have both systems work against each other. This also allowed for water conservation. Since putting in this system ESB cost has reduced significantly (by over 25% from July last year to July 2018).

Water protection and biodiversity are taken seriously on this farm. A large man-made pond was developed by Trevor’s father in the late 70’s which is now a sanctuary for wildlife and a source of water during drought. Slurry and fertilizer buffer zones are taken very seriously on this farm and the field surrounding the pond, which is sloped, receives no slurry. All drains are fenced off and field boundaries are treated as nature corridors. Hedgerows have been recently planted and coppiced as part of the GLAS scheme. As with everything the Crowley family do, this work was carried out skilfully and more than the required amount was planted. All facets of health and safety are prioritized, and animal welfare is first class on this farm. The positive attitude of Trevor and his family is infectious and admirable. This is a highly efficient, cost-effective, environmentally friendly system, run by people who love farming and feel an affinity to the land. Sincere congratulations to the Crowley Family on this fantastic achievement.