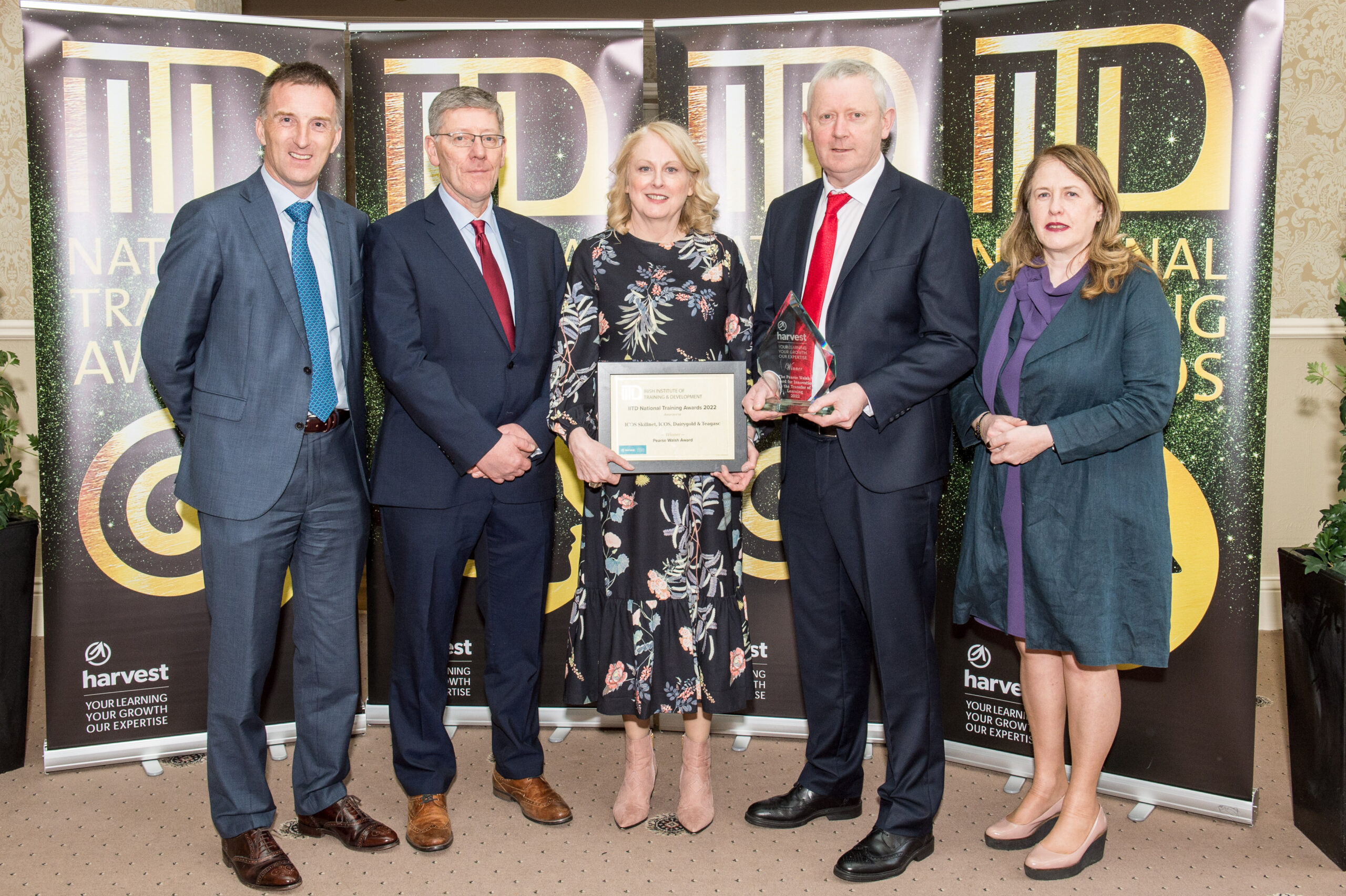 A ‘game changing’ new programme addressing the training and development needs of co-operatives and their farmer members and producers, as they work to reduce their carbon footprint, has won the prestigious Pearse Walsh Award, the supreme accolade of the Irish Institute of Training & Development’s National Training Awards.

ICOS Skillnet, ICOS, Dairygold and Teagasc jointly won the award for the innovative new sustainability training programme that has been developed to guide and support farmers implementing the national Teagasc Signpost Programme. The new initiative was successfully piloted by Dairygold Co-operative to date and will now be rolled out nationally.

Supporting farmers to become ‘Champions4Climate’ and agents of change, the ICOS Skillnet training and development programme upskills farmers and advisers to ensure they have the knowledge and tools to implement climate mitigation, biodiversity enhancement and adaptation practices. It’s planned that this will become the foundational programme to be used as a stepping stone in education and training, in achieving carbon neutral objectives.

Dairygold Co-operative piloted the initiative with considerable success across 15 pilot farms and this will now be extended across over 2,700 Dairygold farms.

Feedback from participants allowed for further tailoring and development, resulting in a final programme for roll out to the broader industry. As it is scaled up nationally by ICOS Skillnet and Teagasc, the initiative will benefit over 16,500 farmers with sustainability training over the next 5 years and onwards.

Billy Goodburn, Head of Learning & Development at ICOS said,  “This programme equips participants with the necessary knowledge, skills and practical competencies to enact and demonstrate best practice sustainability. It informs, involves and empowers farmers to take ownership of their climate action plan for their own farms.”

The programme consists of modules aligned to the National Climate Action Plan as well as the Green Deal,  Farm to Fork and Biodiversity strategies outlined at EU and national levels. Each iteration of the programme is 4-6 days in duration, run over a number of weeks.

The programme follows from a co-operative industry working group which established that there was a high demand for collaboratively based sustainability training, that would support farmer members of co-operatives, and which in turn would have a direct impact on supporting co-operatives to reduce their carbon footprint.

The Programme for Government and the recent Climate Action Amendment Bill 2020 has an objective to achieve ‘climate neutral economy’ by 2050 and the European Green Deal, including a Farm to Fork strategy and Biodiversity strategy sets out increasing climate obligations for the agri-food industry and agriculture in general.  Currently, 35% of Ireland’s greenhouse gas emissions come from the agriculture sector and 83% of emissions in the agriculture sector come from animals.

The Government’s Climate Act 2021 commits Ireland to a legally binding target of net-zero greenhouse gas emissions no later than 2050 and a reduction of 51% by 2030.  Knowledge transfer forms one of the key strategies aligned to the Climate Action plan.

ICOS Skillnet is the Learning and Development Division of the Irish Co-operative Organisation Society.

ICOS Skillnet is co-funded by Skillnet Ireland and member companies. Skillnet Ireland is funded from the National Training Fund through the Department of Further and Higher Education, Research, Innovation and Science.