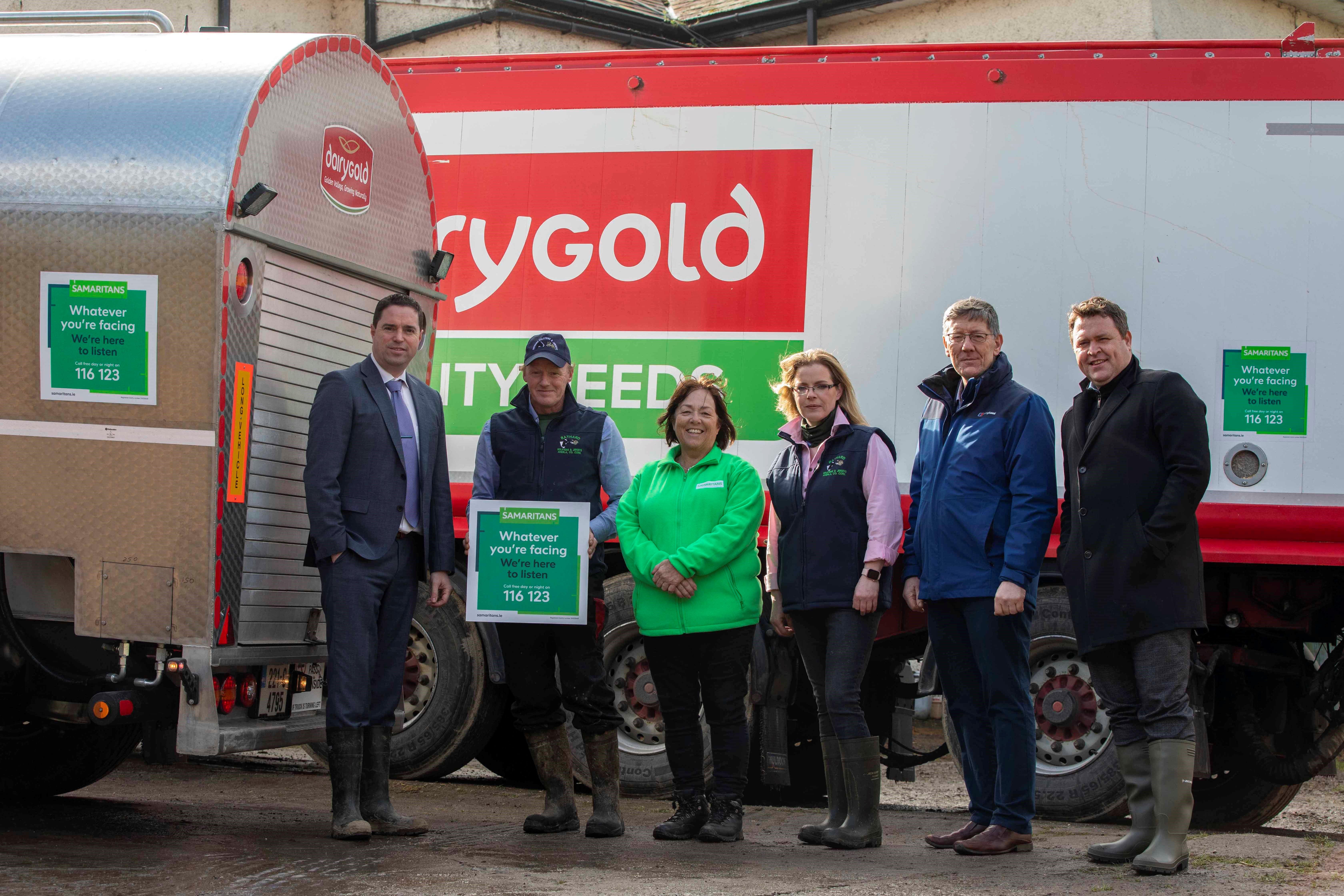 Dairygold is delighted to partner with Samaritans Ireland on its new rural mental health campaign.

The partnership with milk processors – who are all members of the Ibec group, Dairy Industry Ireland (DII) – will see Samaritans’ helpline signage feature on 500 milk tankers travelling across the countryside. Dairygold will feature the Samaritans signage on its entire fleet of milk tankers and agri feed trucks.

The campaign aims to raise awareness of Samaritans freephone number 116 123 among farmers and communities in rural Ireland, especially those living or working in isolation.

The campaign was launched at Peter and Paula Hynes’ dairy farm in Ballincollig, Co Cork. Both Peter and Paula are the founders of Ag Mental Health Week and are ambassadors for Tackle Your Feelings, a mental health campaign that motivates people to be more proactive when it comes to looking after their mental well-being.

The Hynes were joined by Martin Heydon, Minister of State at the Department of Agriculture, Food and the Marine with responsibility for Research & Development, Farm Safety and New Market Development.

Speaking at the launch, Minister Heydon said: “Farmers are exposed to a lot of work pressures and often find themselves working long hours alone. This can lead to isolation and mental health issues which is a real concern for so many people living in rural Ireland.

“I am determined to see a greater focus on farmer mental health and wellbeing given the inextricably link with farm safety. This initiative could make a real difference in reaching those who need support most and I want to commend the leadership shown by all those involved.”

Attending the launch was Dairygold Vice-Chairman, Mr. Patrick Clancy who said: “As a dairy farmer myself, I understand the impact the stress of managing a farm and working long hours in isolation can have on someone’s well-being. I am proud of Dairygold and its Members for supporting this vital campaign.

Peter Hynes has openly spoke about his own mental health struggles and founded Ag Mental Health Week with Paula to show others in rural areas that support is available.

“Farming is a demanding and tough occupation for some. Ensuring we highlight the importance of reaching out for support in times of crisis is crucial and the greatest way to reduce stigma around mental health and suicide is through a united voice,” he said.

“The scale of this message and collaboration between Samaritans Ireland and the Irish dairy industry is truly inspiring, ensuring rural Ireland know there is always someone willing to listen.”

Samaritans volunteers answer over half a million calls for help every year.

Samaritans Deputy Regional Director, Aileen Spitere, said the initiative will target those hard-to-reach groups who are often most at risk of loneliness and isolation, may have family or financial worries, have mental health problems, or feel suicidal: “We are delighted to have the support of the dairy co-operatives for this campaign, not just to reach dairy farmers, but anyone living, working or driving in rural areas who may see our helpline number on a vehicle,” said Aileen, a volunteer in Samaritans Cork branch.

“We want people to know that Samaritans is here for anyone struggling to cope, no matter who you are or where you are, on freephone 116 123 or email jo@samaritans.ie.

“Mental health challenges and suicide are complex, going beyond simply where you live or what profession you are in, but these can also be factors. The increased risk factors for those living in rural and agricultural settings such as poor access to services, isolation and persistent loneliness mean it’s essential for us to do more to reach people in these environments.”

Dairygold is a strong advocate for safeguarding not only the physical well-being of its Members and Employees but also their mental well-being. Throughout the year Dairygold supports a range of mental health initiatives such as Ag Mental Health Week, Rearing To Go and ICOS Skillnet’s work on “Minding Your Head On The Farm”.

Anyone can contact Samaritans for free any time from any phone on 116 123, even a mobile without credit, and the number won’t show up on your phone bill. Or email jo@samaritans.ie or go to www.samaritans.org to find details of your nearest branch.