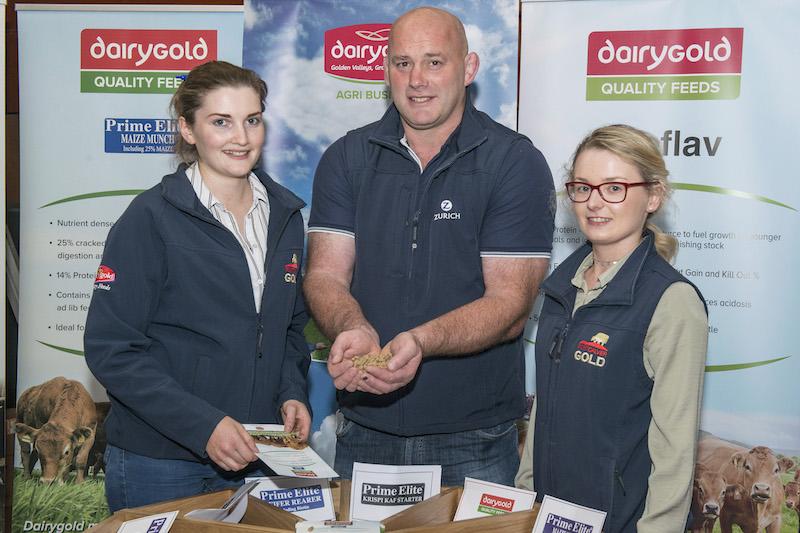 Addressing a 400 strong crowd last Wednesday night at Corrin mart, Fermoy, Nial Griffey Beef and Tillage Technical Manager Dairygold Agribusiness opened the Dairygold Quality Feeds Expo and Knowledge Transfer Event by stating the objective of the meeting was to bring people together to share the best available knowledge of beef systems, to ensure  all farmers are all on the road to a sustainable & profitable  business.

On the night Liam Stack Ruminant Technical Manager with Dairygold advised that high quality autumn grass and grass silage were the keys to minimising feed cost. Liam also emphasised that a quality winter beef feed should be tailored around the core values of:

The second speaker on the night Doreen Corridan as Munster AI Vet and an esteemed pedigree cattle breeder advised on a range of strategies to optimise animal health in beef stock. Her no-nonsense common sense approach to farm management practices was well received by the farmers present.  Doreen Corridan spoke on the importance of having the correct housing conditions for stock explaining that respiratory issues can be a major source of loss of thrives in stocks that are wintered indoors.

She commented that “A crucial factor is that the shed has necessary ventilation at the roof to allow stale air to escape and good side ventilation to bring fresh air in. An effective way of letting in clean air while keeping out draughts and rain was to use windbreakers which let in roughly 80% of possible air. Areas with leaking troughs or damp corners could also cause issues. She advised an outlet of approximately 0.1 square meter per animal to allow hot air out and pointed out cobwebs or dark spots on roof as evidence of poor ventilation

On the topic of dosing at this time of year Doreen said that stock should be dosed four weeks prior to weaning. She stated this should be done while the immune system of the calf is at its strongest and not to leave it until after weaning because the immune system is under enough pressure coming to terms with the weaning process.

The third speaker on the night was Karen Dukelow, Teagasc Beef Specialist from Moorepark. Karen provided very straightforward advice that was appreciated by those present. Karen commented that farmers should focus on keeping systems simple to drive profit with extra attention needed on the important areas of management such as grassland management and breeding

She concluded by saying “the key drivers to profitability are all about efficiencies and keeping costs low by maximising grass in the diet and maximising output through stocking rate and live weight gain per animal.”  Her striking message was that €14,000 extra income could be added by only modest improvements in farm management practices on a 40 Ha block.

The final speaker on the night Paul Nolan Group Development Manager for Dawn Meats who gave the large crowd present an insight into current and future market trends, the effect of Brexit and had one of the company’s graders on hand to demonstrate the finishing requirement on different classes of stock to satisfy various markets. The live animal demos were well received by all present.

Paul also commented that Dawn Groups strategy with Brexit is to protect the valuable markets they already have in the UK while trying to diversify and build other markets outside the UK and Europe.

Seamus O’Mahony Head of Sales Dairygold Agribusiness commented that the meeting placed a focus on the factors of production that all farmers in partnership with their Dairygold Beef Advisors can control such as grassland management, animal health and nutrition.

Seamus concluded the meeting by commenting that the Irish beef farmer must take heart in the fact that we are producing a fantastic product in an environmentally sound fashion and that our beef products will have a growing demand in International markets.

To view more images from this even please visit the Media Gallery.